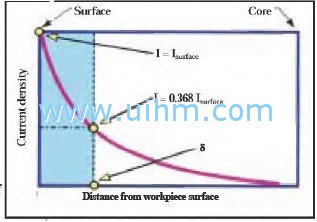 This effect will also be found in any electrically conductive body (workpiece) lo- cated inside an induction coil or in close proximity to the coil. According to this phenomenon, eddy currents induced within the workpiece will primarily flow in the surface layer (the "skin"), where 86% of all induced power will be concentrated.
This layer is called the reference depth or current penetration depth, 5. The degree of skin effect de- pends on the frequency and material properties (electrical resistivity, p, and relative magnetic permeability, of the conductor.1
Next: Induction Heating of Flat ObjectsPrevious: Solid State Technology of Induction Heating